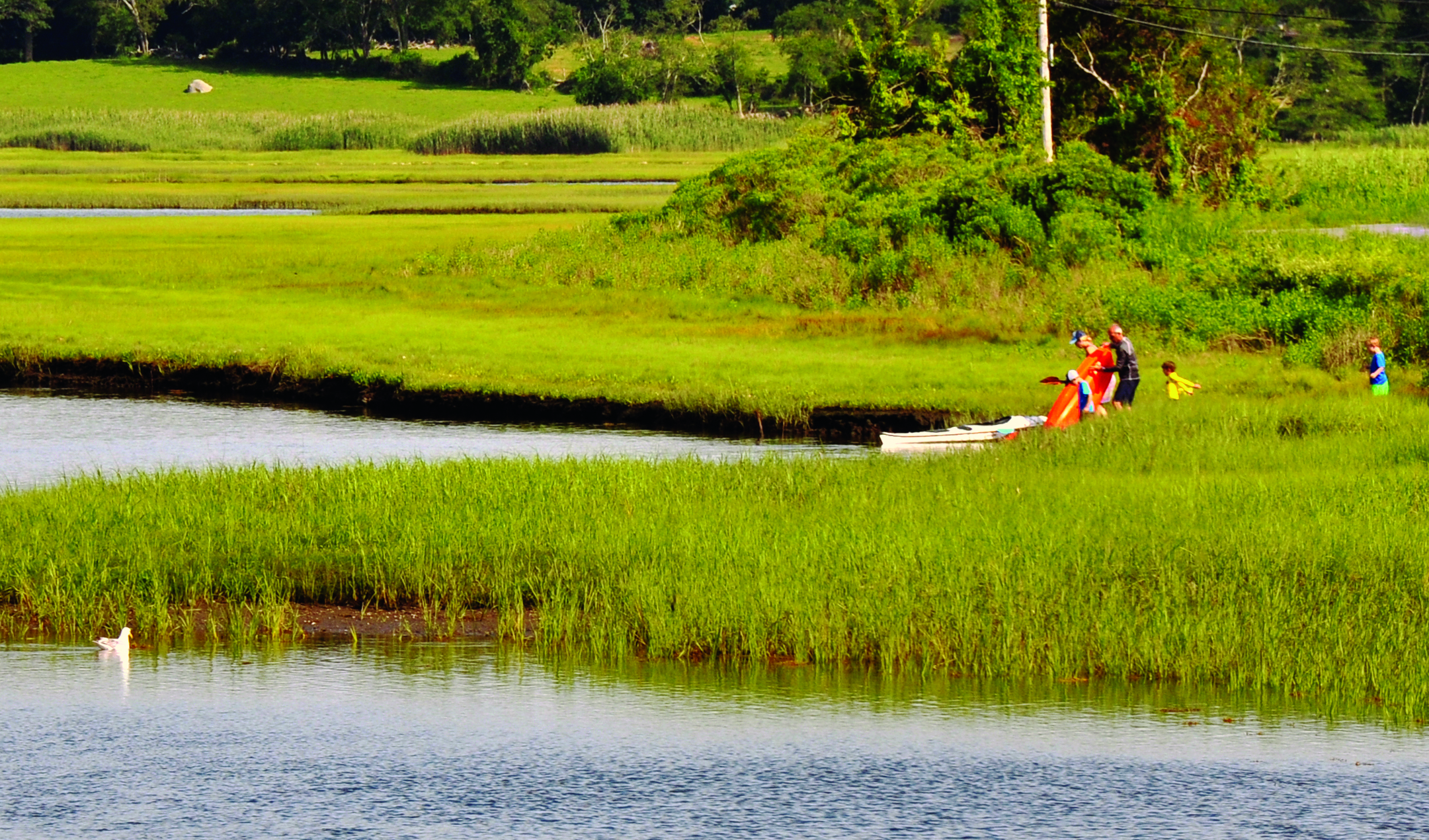 The water that falls onto our watershed during storms. As stormwater “runs off” the land, it picks up fertilizers, chemicals, litter and other pollutants and carries them into our Bay. This is a big issue for places with many impervious surfaces, which cannot absorb water.

A surface that water cannot sink into, primarily artificial surfaces such as roads, buildings and parking lots. Stormwater should naturally soak into the ground and gradually seep through it before making its way into streams. This process slows down the rate at which the water enters waterways and filters out contaminants. Instead, impervious surfaces send stormwater into streams and storm drains immediately, causing flooding and pollution.

A place that catches stormwater runoff. These areas allow stormwater to seep into soil and filter out pollutants. An infiltration area is often a depression, like a dry, sandy soil area. It can also be a place that is wet, like a wetland designed specifically for stormwater treatment. This process treats stormwater at the source, preventing runoff into the Bay or other waterbodies.

The natural process marshes undergo to increase elevation in response to rising sea levels. As roots and other plant material build up, the marsh rises, staying above sea levels. During the past ten years, accelerated sea level rise has outpaced marsh accretion, drowning marsh grasses. As vegetation dies, the marsh has nothing to use to build its elevation. To survive, the plants move into adjacent low-lying areas called marsh migration corridors.

Long-term, significant changes to the average weather in an area or on Earth. When environmentalists talk about “climate change,” they usually mean man-made climate change, the primary cause of which is the burning of fossil fuels such as natural gas, oil and coal. This process introduces extra carbon dioxide into our atmosphere. As the atmosphere absorbs this carbon dioxide, the planet’s temperature increases.

A result of excess carbon dioxide entering our water. To help regulate our planet’s natural climate, the ocean acts like a sponge and absorbs carbon dioxide from the atmosphere. When the atmosphere absorbs too much carbon dioxide, the pH of the water changes. As a result, the ocean becomes more acidic, which can be harmful to ocean life. For instance, animals with a shell or exoskeleton, such as clams, crabs, corals and plankton, can no longer absorb calcium to build their shells, leaving them vulnerable to predators.

Tiny pieces of plastic—about the size of a sesame seed—that pollute the environment. Some microplastics were made at this size, like the microbeads in face wash and the microfibers in polyester clothing. Other microplastics are the result of larger items—like bottles, bags and straws—breaking down due to sun exposure, erosion and animal interaction.

The substances that plant and animal life need to survive, including vitamins, minerals and proteins. Nutrients can come from both natural and unnatural sources. While they appear naturally, excessive amounts often enter our waters in the form of fertilizers and pet waste, from septic systems and other agents of pollution.

The process that occurs when there are too many nutrients in a body of water. The extra nutrients create harmful algal blooms and lead to fish kills. When we add nutrients to an ecosystem on land, we see how they help plants and algae within it grow. The same process takes place in the water. But the excessive plant growth blocks out sunlight for plants on the bottom, setting off a chain reaction. First, the excess algae and plant matter decompose. Then, the decomposed matter produces carbon dioxide and uses up dissolved oxygen. This creates dead zones where fish and other species cannot breathe.

A species believed to have been present before European settlement. For hundreds of thousands of years—or longer—these plants have evolved without much interference from humans. When planted in the right spot, native plants need far less water and fertilizer than other species. By planting more native plants, we can save both money and time, while also reducing the amount of nutrients running off land and into the Bay and its watershed.