The end of the coal era in the Narragansett Bay watershed

HomeThe end of the coal era in the Narragansett Bay watershed

The end of the coal era in the Narragansett Bay watershed 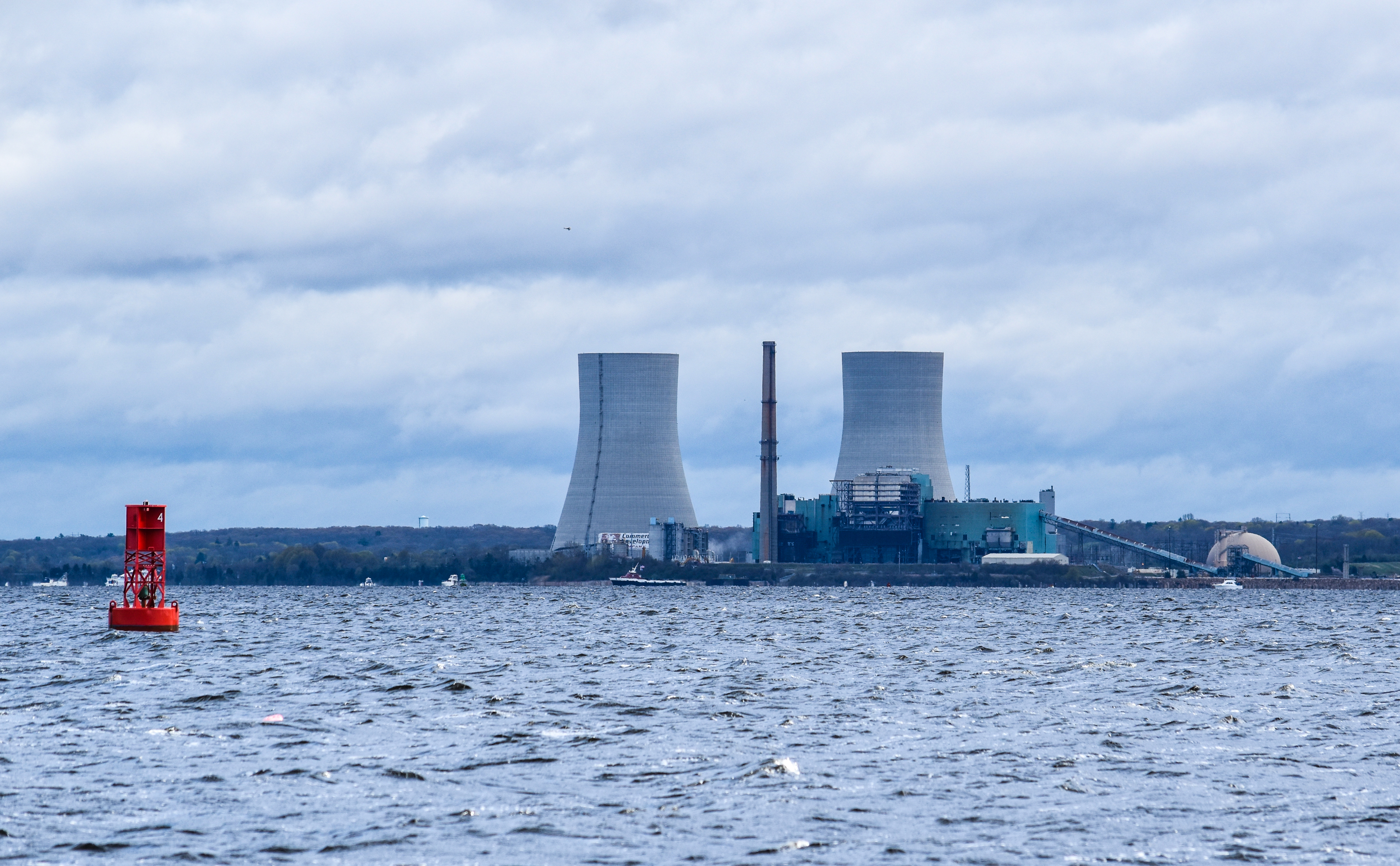 As we often say at Save The Bay, some of the greatest victories take the most time. On Saturday, the implosion of the Brayton Point’s twin cooling towers placed an exclamation point on the end of the coal era in the Narragansett Bay watershed. Brayton Point Power Station went online in Somerset, Massachusetts in 1963. It was the largest coal-fired plant in New England, operating along the mouth of the Lee River and Mount Hope Bay. During its half-century of operation, the Brayton Point Power Station was one of the biggest polluters in New England. At peak capacity, the plant could power approximately 1.5 million homes, but at great environmental cost. 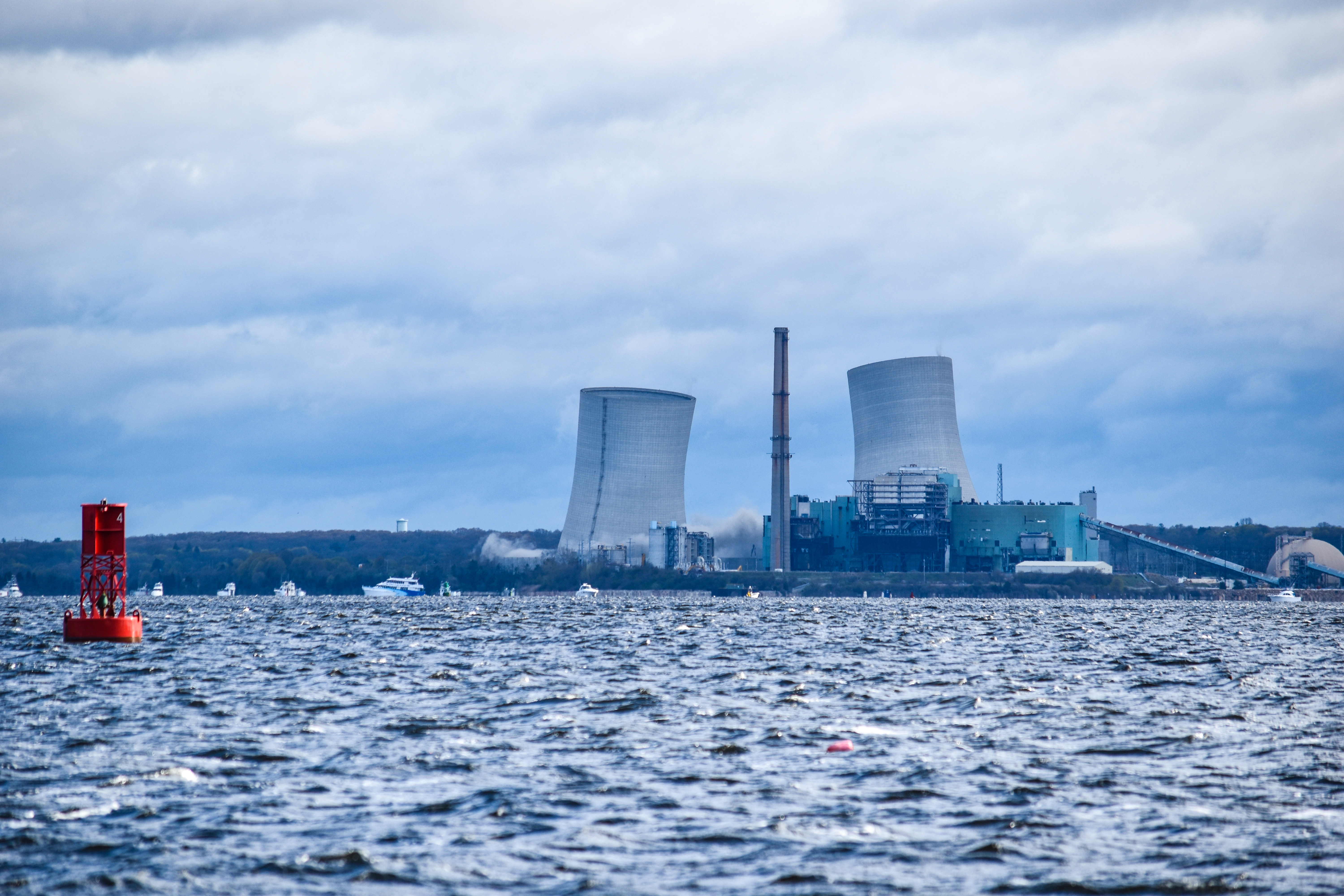 Save The Bay’s involvement with Brayton Point began around 1972 when the plant proposed the construction of a fourth power-generating unit. Of primary concern was the cooling water system, which took in a billion gallons of water a day from Mount Hope Bay and discharged it at more than 90 degrees Fahrenheit. As a result, the Lee River and Mount Hope Bay experienced numerous fish kills during the 1960s and 70s. Regardless, the plant’s expansion was approved, and a fourth generating unit was built and brought online. At the time, Save The Bay felt that minor alterations to the cooling water discharge system were insufficient. The discharge dramatically altered nearby water conditions, destroyed fish larvae, and decimated the winter flounder population. 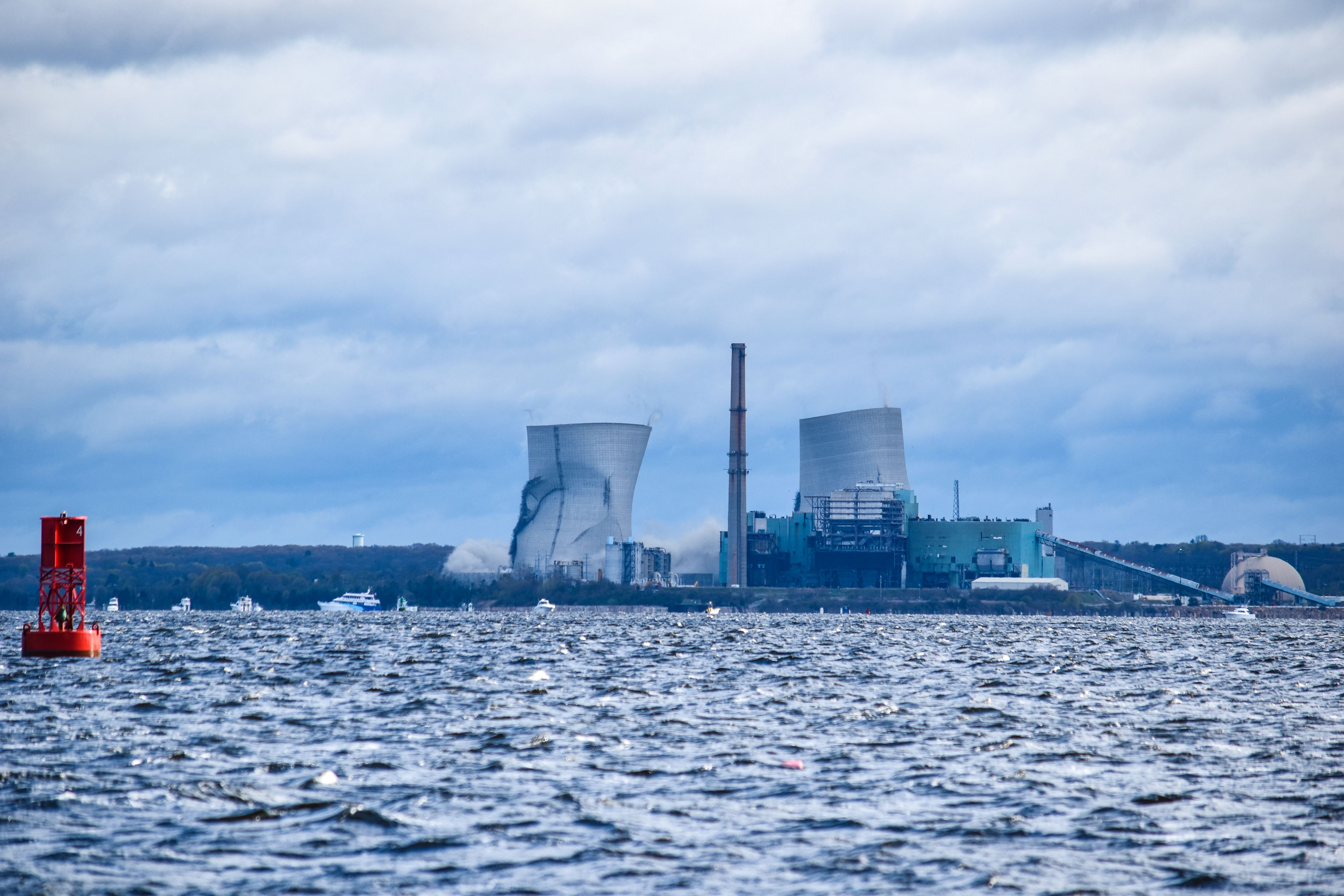 In the mid-90s, about a decade after Brayton Point increased its discharge of heated cooling water into Mount Hope Bay to an average of 1,400,000,000 gallons a day, the Department of Environmental Management found an 87 percent decline in Mount Hope Bay fish populations. DEM found significant evidence of a loss in Bay productivity as a result of increased temperatures from cooling water discharge and the destruction of fish and larvae as water was drawn into the plant. To reverse this devastating trend, Save The Bay began advocating for a reduction in discharge levels and supported an effort to successfully forge an agreement on an interim permit for Brayton Point between government agencies and New England Power Company. The new permit required the plant to reduce its discharge levels to pre-1985 levels, giving relief to struggling fish populations. 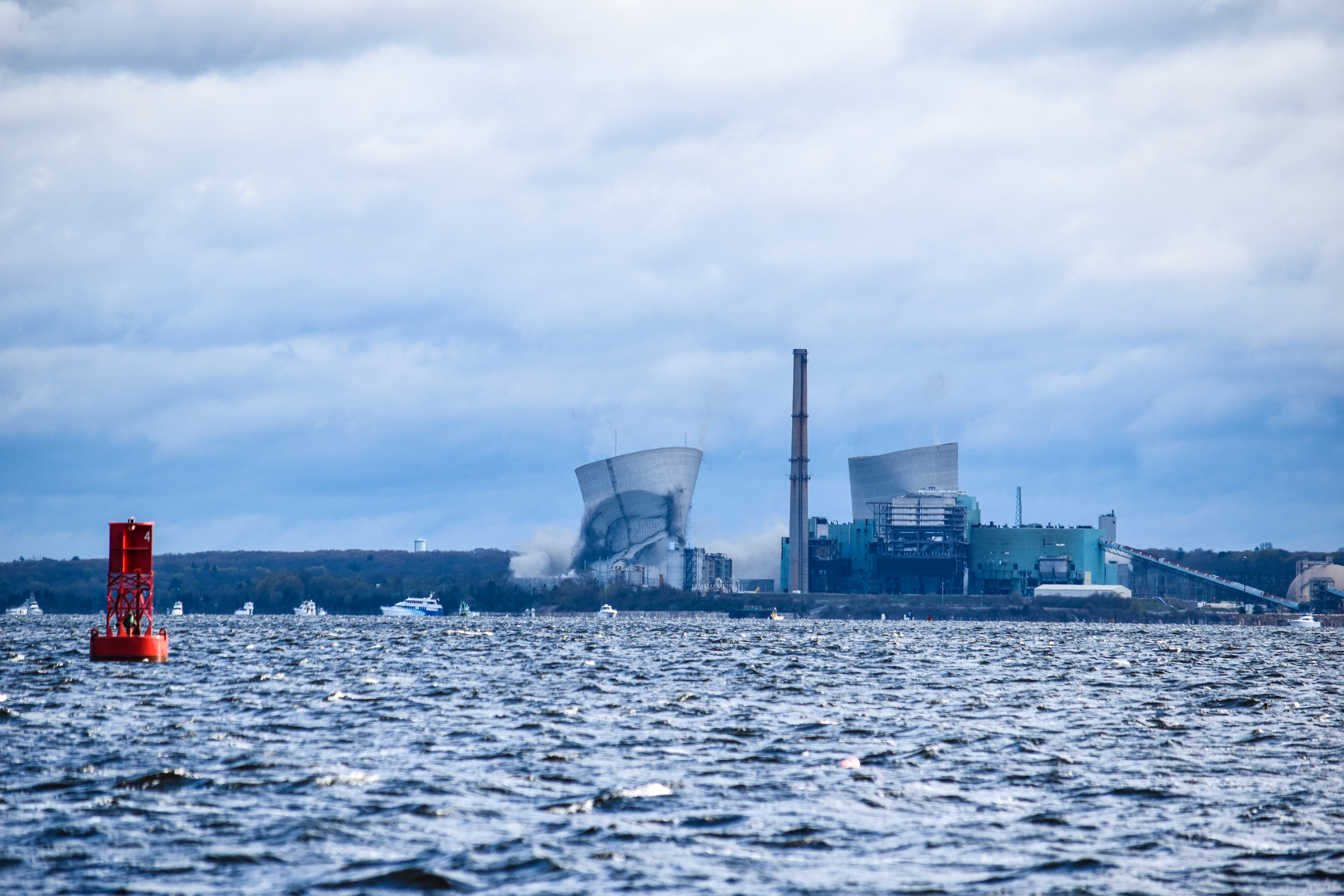 Soon after, the EPA revoked the plant’s discharge permit, leading to a decade of upgrades intended to reduce the environmental impact of Brayton Point’s operations. In total, more than a billion dollars were spent on plant upgrades. The most obvious was the two massive cooling towers, completed in 2011 and designed to reduce the impact of the heated water discharged into Mount Hope Bay. Save The Bay was heavily involved in advocating for improvements to the plant’s cooling system, and the tower project was a major victory for Mount Hope Bay and the entire Narragansett Bay ecosystem. The cooling towers, whose massive size reflected the size of the environmental problems the plant caused, reduced demand on Mount Hope Bay’s resources, requiring 5 million gallons of water a day instead of a billion gallons. 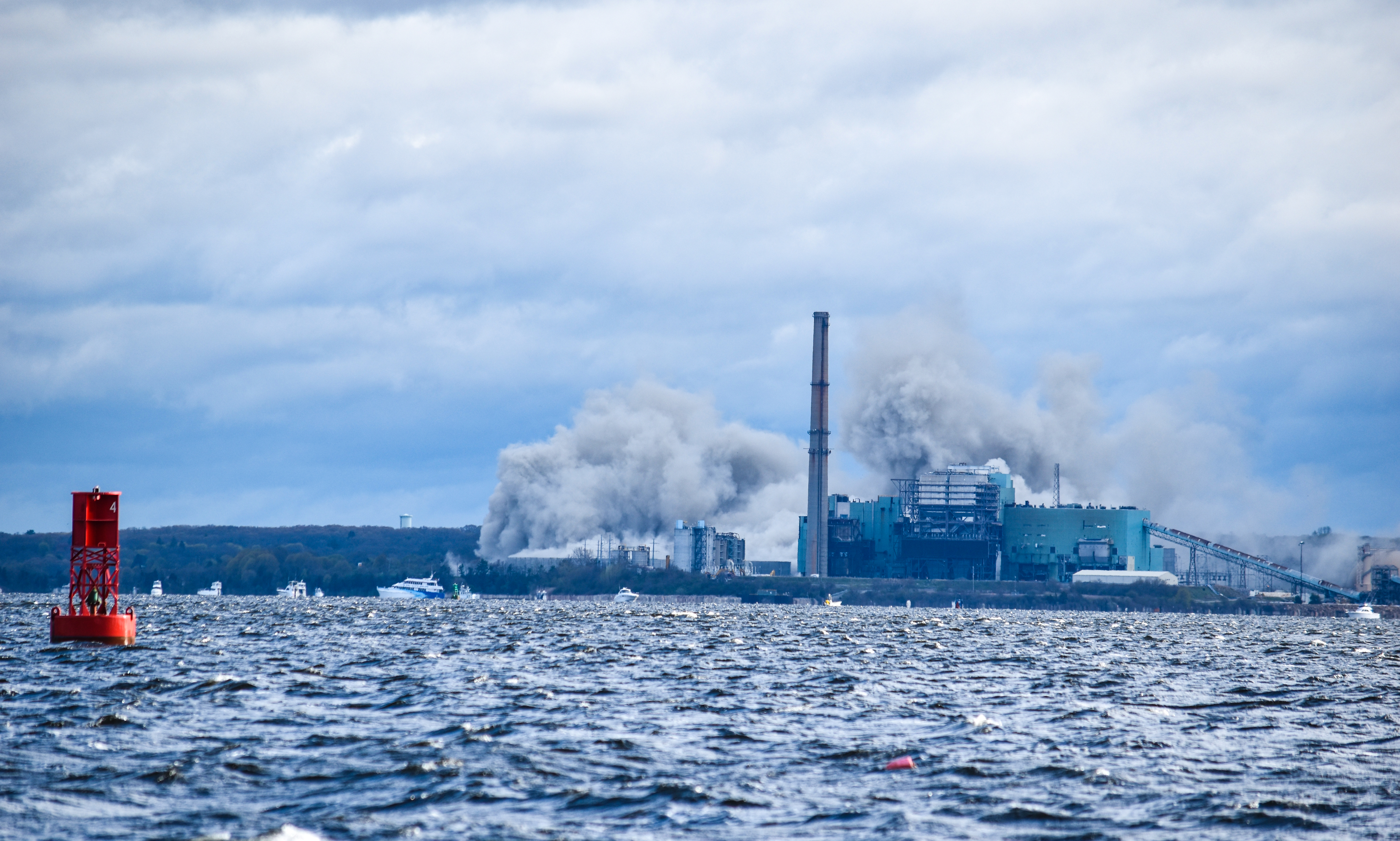 For many, including Save The Bay, the Brayton Point upgrades were too little, too late. By the time controls were put in place, the local population of winter flounder and other species were beyond recovery. With the added stress of climate change, it’s likely some species will never return. Today, the plant is closed and the towers are gone, along with the energy companies that profited by polluting our public resources. Here’s to hoping that Brayton Point’s future is brighter. Indications are that the current owners plan to leverage the site for renewable energy purposes. Regardless of the plans, Save The Bay will be here to look out for the Bay, as we have for almost 50 years.