After growing up in suburban Boston and spending summers on Buzzards Bay, he first moved to Rhode Island in 1976 to attend Brown University, before going on to earn an MBA at Harvard University’s Graduate School of Business Administration and begin a finance career in Seattle and Boston. His love of the sea brought him to back to the Ocean State in 1989, when he promptly joined Save The Bay as a member and swimmer. 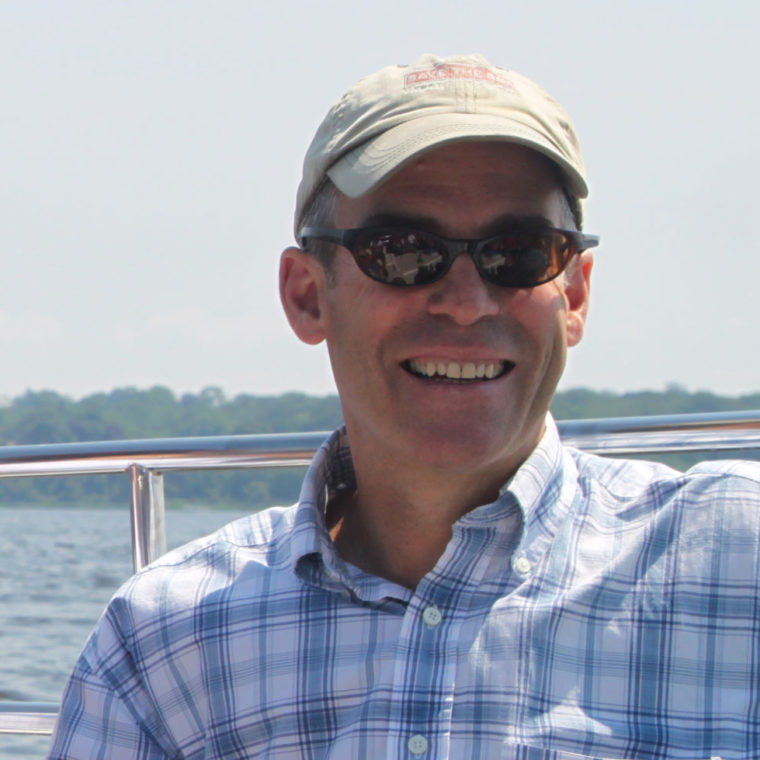 My dad always encouraged me to view every turn in life as an opportunity to learn, and introduced me to marine life and the beauty of the ocean. It is a privilege to lead such an outstanding organization that has been at the vanguard of protecting the Bay for nearly 50 years.

Like many Rhode Islanders, Jonathan has always enjoyed a deep connection to the Bay, where he regularly swims, kayaks and fishes. Taking the helm of Save The Bay gave him a unique opportunity to play a leadership role in protecting Narragansett Bay and inspiring the next generation of Bay stewards. During his tenure, Save The Bay has successfully challenged ill-conceived and damaging infrastructure projects, sounded the alarm on changing climate conditions, completed dozens of habitat restoration projects, achieved major legislative victories, expanded Save The Bay’s environmental education programs, and strengthened its financial foundation.

Before taking the helm at Save The Bay, Jonathan commuted to Boston, where he worked in financial services as a securities analyst, investment manager and co-founder of an investment management company. During these years he also served on the Board of the Gordon School in East Providence and joined the faculty of Providence College as an adjunct professor.

Our talented habitat restoration team mobilizes community partners and leads the hands-on work to help coastal habitats and watershed areas thrive, while our Narragansett Baykeeper, South Coastkeeper and Riverkeeper act as watchdogs to ensure the Bay and its watershed are protected from pollution. And, working closely with state and local governments, our policy team helps pass laws that protect the Bay, pushes for enforcement of environmental laws, and keeps lines of communication open with community leaders on the importance of environmental action.

Our small but mighty communications team tells the stories of Narragansett Bay—its marine life and those who enjoy the Bay—and of Save The Bay, past, present and future. They share these stories and engage with members, supporters and community through our print magazine, electronic newsletters, annual report, website, social media and marketing materials. And they support the outreach efforts of our education, advocacy, restoration and fund raising teams, ensuring that our community understands the mission, vision and significance of Save The Bay.

Save The Bay’s success, and very existence, depends on our energetic development and outreach team to grow and maintain our membership and to build strong relationships with our generous supporters at all levels. They lead our annual fund raising drives, write grants, engage with communities to reach new audiences, partner with local businesses to offer member and sponsor benefits, and so much more.

Our marine science educators work tirelessly to fulfill our vision for a swimmable, fishable, healthy Narragansett Bay through the next generation of Bay stewards. They provide engaging seal and lighthouse tours and summer camps to our community members, run our Exploration Center and Aquarium in Newport, and partner with local schools and school districts to offer the best marine science and environmental education programs year-round.

These are the brilliant minds that track day-to-day revenue and expenses and analyze and reconcile all accounts of the organization. Their work ensures strong quality control over all our financial transactions and reporting, managing our compliance with local, state and federal governmental reporting requirements for grants, and leading Save The Bay in an annual audit process.

From events and partner endeavors, to the day-to-day operation of our Bay, Exploration and South Coast centers, our operation team plays a critical, mostly-behind-the-scenes role in our success. They manage and lead the thousands of volunteers who help us protect and improve Narragansett Bay each year, organize our annual Save The Bay Swim and other special events, welcome and host visitors to our Bay Center, and serve as our human resources, information technology, and facilities departments, making sure Save The Bay has the infrastructure we need.